Yasubey Enomoto: "After this fight we'll see what the future brings for me and ACB" 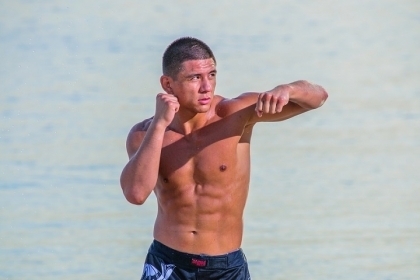 Yasubey Enomoto: "After this fight we'll see what the future brings for me and ACB"

"The Swiss Samurai" commented on the fast transition from his cancelled bout in Europe to the ACB league jubilee tournament, shared his opinion about his opponent and told what present he's going to give himself for his birthday.

- You fought in Russia several times. Have you heard anything about ACB before you were signed for this fight? And how did it happen anyway? Was it your initiative or did promoters offer you a deal?

- Yes, I’ve known about ACB before. I was invited as a special guest to the final of the first ACB GP. We talked a while ago about a possible fight on the ACB 50 card. We got in contact again after my fight got cancelled at the last second 1 1/2 weeks ago. My good friend Mairbek Taisumov has organized everything so that this fight will finally happen on such short notice.

- Are you aware that this event is the biggest one so far in the history of the promotion? Is it important for you to be a part of such a big tournament?

- Yes I am aware of that. That’s why it was important for me to make my promotional debut at ACB 50. And I am happy that everything worked out well that I can now be on that anniversary card.

- You are very popular in Russia. Do you think the crowd will be supporting you this time as well?

- Let’s see, I would be very happy if the Russian fans would be on my side for this fight. It’s a huge achievement for me that people like me so much in Russia. I appreciate that a lot and I am always happy when I can perform in Russia and make the fans happy with good fights.

- Do you know that Igor Svirid is a first middleweight champ in ACB? What do you think about your opponent in general?

- Yes as I said before I was invited as a guest to that ACB GP final, so I saw Igor's MW championship fight and I was very impressed by his entertaining fighting style. I also saw how he became ONE FC champion with a very great performance and I have a lot of respect for him. I like to fight people who wanna put on a show like I do. This is what the fans wanna see - entertaining battles. I also trained with Igor in Thailand and in my opinion he is a very aggressive and dangerous opponent who always tries to go for the kill.

- What about your future – do you have long term plans with ACB or is it just a one time thing?

- I’m fighting at ACB 50 for now and I am happy for that opportunity to be a part of the ACB history, so let’s see after that fight what the future brings with me and ACB.

- In conclusion – do you have any message to your opponent and Russian fans?

- To my opponent I have to say I am looking forward to an action-packed fight with him and let's get all the fans in the Stadium going crazy about our performance. To the Russian fans I wanna say I am happy that they always give me great support when I am in Russia and I am happy to give them again a show they won’t forget for a while at ACB 50 on December 18. December 15 is my birthday, so on December 18 I’ll try my best to make myself a nice birthday gift.