Sharaf Davlatmurodov: With a good hit, Cooper can be knocked out again 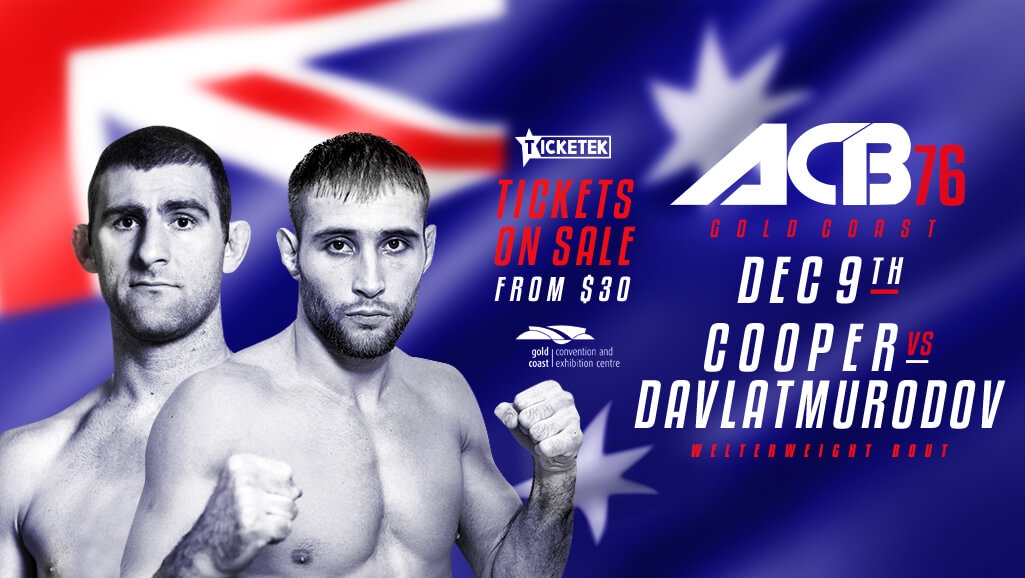 Sharaf Davlatmurodov: With a good hit, Cooper can be knocked out again

Sharaf Davlatmurodov, ranked sixth in the welterweight MMA rankings, is to return to the cage already this Saturday. His fight against Brett Cooper will be the main event of the Australian ACB 76. On the eve of the match Sharaf gave an interview to our editorial staff, in which he told about his opponent, the situation in the division, the potential rematch with Mukhamed Berkhamov and many other things.

About fighting the veteran Brett Cooper:
- My team and I have chosen the fighting tactics for him. We know our opponent. Cooper is a pretty famous person. He went through a lot of fights. He is an experienced and serious opponent. But my feelings and experiences are exactly the same as before any other fight. I'm concentrated, in the right mood. I’ve been preparing for this fight for two and a half months. Approximately two months before the tournament I learned the name of my opponent. Mentally I’ve prepared a long time ago. Now I'm just waiting for the weight cut to end and for the fight itself to start.

About the potential rematch with Mukhamed Berkhamov:
- I do not want to look behind my opponent. So far I can not say anything about my next fights. If God gives me victory, I will consider the options. In any case, everything will be as the matchmakers say. We are fighters, we have no right to choose anything. We can only ask, but we do not know how the management will decide everything. Mukhamed Berkhamov is now facing a tough fight. I do not know how it will turn out. Let's wait for the outcome of the bout, and then we will decide.

Prediction for the Mukhamed Berkhamov - Albert Tumenov fight:
- I think the chances are equal in the Berkhamov – Tumenov fight. From my point of view, Mukhamed Berkhamov is a good grappler, a good wrestler. But in order to control the opponent for all 5 rounds, you need serious endurance in the sense of constantly keeping the opponent on the ground and not allowing him to dominate in stand-up. I think that Tumenov’s level is higher in terms of striking techniques, since he has more experience in this. But in wrestling he is inferior to Berkhamov. However, he can knock out his opponent not only at the beginning of the fight, but also in the later rounds. So the chances are roughly even. This will be an interesting fight. Here luck, endurance, and other aspects of the fight will play a role. So, we'll see.

About the performance in the main fight of the night for the third time in a row:
- I was not particularly influenced by the experience of performing in the main fights of the night. Unless I had a couple more hours to recover. Because every hour after the weigh-in is fully scheduled in order to recover and approach the fight in the best possible shape. And the main fight of the tournament comes two or three hours after the start, which means that there is additional time for recovering. This is a big plus for me, since I cut 13-14 kilograms. And in terms of my mental state, the performance in the main bouts does not affect me at all. Of course, it's nice that recently I have been headlining the tournaments. It’s flattering. I’m very grateful for this to the matchmakers and the management of the ACB League.

Knowing the location of the tournament, my team and I tentatively decided that after the Russian Cup in hand-to-hand combat, we will fly to the camp in Thailand since it is much more similar in terms of climate and the time zone than our training base in Moscow. Accordingly, we will need to fly less and spend less time adapting. We have flown to the Gold Coast in advance just for this. We are already slowly cutting weight and training lightly.

About training for the fight:
- Our camp was held in Thailand, in the Phuket Top Team, under the guidance of Eric Ursek - an experienced and knowledgeable coach. I really enjoyed this camp. We were preparing for my opponent. In addition, Eric’s teammate had already fought with Cooper. Therefore, he knows his strengths and weaknesses, and is able to make positive changes to my training camp. We have set a competent fight plan. You know for yourself that in MMA a fight can go many different ways. But we did lots of work. And at the moment, I believe this is my strongest camp. For five weeks in Thailand we have managed to work on many things. Special thanks to the Strela team led by Taras Kiyashko for the support and assistance in my preparation.

About his advantages over his opponent:
- I do not see any obvious superiority over Brett Cooper. Maybe in terms of wrestling and fighting techniques there are some advantages. Footwork and the sense of distance - these are my trumps in this confrontation, since he is a more standing athlete. Cooper moved to our weight division from a heavier one, which means that he is slower. He is more used to stand still, then go ahead and just exchange punches. He is the so-called tough guy. I think my advantage is that I'm more mobile. He had already been knocked out cold several times. He’s got serious problems with his vestibular apparatus. So, with a good hit, he can be knocked out again.