Ed Arthur : "I'm just going to be too sharp, too quick" 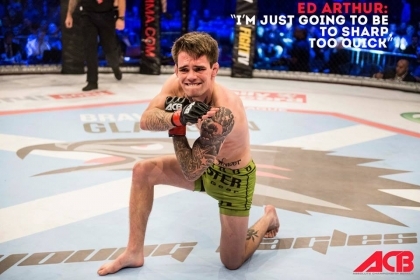 Ed Arthur : "I'm just going to be too sharp, too quick"

E: That’s the only thing that’s ben going through my mind this entire fight camp – I need to get the full collection! Don’t get me wrong I’ll take another sub of the night or fight of the night but I’ve been putting out the vibes and I’m coming for the KO! I want a bulletproof performance, be ruthless, put on a great show and get that bonus.

B: What did you know about your opponent before you got signed to fight him?

E: I didn’t know too much about him. I do watch the ACB shows so I had seen his last fight but it wasn’t until I looked up his name that I realized who I was fighting. He seems like a strong, compact, basic fighter – I call them a ‘Thai pad fighter’, someone who tries to hit things as hard as possible hoping they go down. I never go down so he’s about to bump into the wrong person.
It is a fight I’m excited about though – he looks like he comes to fight and wants a good fight and that’s the type of competition I want. For a show as big as ACB 50 I think it’s a great fight and I think we’re going to steal the show!
Skill will be the biggest difference – he might be stronger but my skill will be the difference here.

B: In an interview he did before this fight he refres to you as the ‘little McGregor’ – What do you think of that?

E: (Laughing) I’ve heard that one before! It’s fuuny!

B: He basically said he doesn’t care what you have to say it’s what happens in the cage that matters.

E: I do find that funny, I’ve heard the ‘little McGregor’ thing once or twice before but that’s maybe what you’ll get if you really believe in yourself and aren’t scared to be vocal about it. Some fighters are too scared to speak like me and if you want to call me that, that’s fine. All I know is I believe in myself and I’m not scared to say what I think will happen in a fight and if you are scared to say that then what the hell you even doing in this sport? You have to believe in yourself and that you can win fights and I know one of the things he said was that I talked a lot before the Peter Yan fight but if I don’t believe I’m going to win then I have no business being in there.

B: He also said that off the back of his last fight he’s changed his entire camp for ACB 50. He wasn’t happy with his training or preparation for the last fight against Oleg Borisov so he’s changed it all – What are your thoughts on that?

E: I can’t speak personally on the situation as I wasn’t there but when you pass the blame on to everyone else and there are times when training, coaches or situations need to be improved but when you say things like ‘I need to change EVERYTHING, my whole entire camp – it’s them not me’ that sounds to me like he’s just passing the blame. One of the biggest things I’ve learned in this game is you need to be honest with yourself. He sounds fearful, weak, not honest. Doesn’t sound bullet proof like we like to be on our team. Doesn’t sound right to me and it’s not something I’d do. I’m with my team. I’m with Dean Amasinger. Like he teaches me – believe in yourself, believe in your team and believe in the system you are working with. Work hard and good things will happen. Bitch and moan and good things ain’t going to happen.

B: How’s your camp been for this one?

E: It’s been brilliant. One of my main training partners Adam Amasinger fought just 2 weeks ago so we’ve been coming up together. We’re working hard. On top off all my training and my coaching with Dean I’m also doing 2 private sessions a week over at Mamba Boxing. I’m just tightening everything up. I’m working with the same guys, the same team, same strength and conditioning coach, sames Jiu Jitsu coach, same head coach and I’ve just added the boxing with Paul Richards at Mamba boxing. I’m doing what I always do, training all the time, having fun and just getting better! This camp has been about skills and using my mind.
I learned a lot from the Peter Yan fight. I’ve watched it back and I noticed that I was charging forward, too eager almost. No fear but that played against me. I landed good shots but then I smothered the work and because of that I lost Peters respect on the power because I was smothering everything. For this fight I will be more focused and disciplined. I’ll take my time, pick my shots, use my distance and will look to cause damage and try to beat him up – suffocate him.

B: With your 2 performances for ACB you have gained a lot of Russian fans – how does that feel to have won so many of them over with your fighting style?

E: I love it! I absolutely love it! I said to my coach that it amazes me how many Russians stated following after my first fight for ACB! I’ve had so many follow me on Twitter, Instgram and facebook – they’ve even started following some of my friends! It really does blow me away and despite the language barrier I’m feeling the love. I love the fact that ACB put on real fights for real fans and I love how the Russians get behind their fighters!

B: What does it mean to be part of their biggest ever show on December 18th ACB 50?

E: I am so grateful to be on this show! I’ve been saying this is the show I want to be on. It huge and I knew that they were going to be pulling in all their most exciting fighters, all their killers for this show and obviously who else are they going to call but me! Look at the card from top to bottom it’s full of exciting fights and exciting match-ups. Every fight looks to be a great fight but I think our fight could steal the show. I’m very grateful to be a part of it.

B: We’re just a couple of weeks away from the event – how do you see the fight going?

E: I think I’m just going to be too sharp, too quick. I think my boxing will be the big difference and I’ll light him up. We’ll have some good exchanges and he may clip me here or there but I feel he’ll mainly be hitting air getting frustrated and making mistakes. I’ll control the distance too well and I’ll either stop him with a number of shots or he’ll get desperate – shoot for the takedown and if he tries to rush to take me down I’ll sub him 100%! Either way I’ll get KO of the night or sub of the night!