Statistics of the ACB league bonuses in 2016 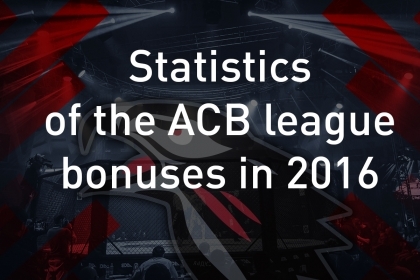 Statistics of the ACB league bonuses in 2016

The greatest number of bonuses, namely two, was received by 6 fighters: Yusuf Raisov, Yusup Umarov, Petr Yan, Askar Askarov, Mohamed Berhamov, Ed Arthur. We are looking forward to the ACB 49 "Rostov Sich" and ACB 50 tournaments to see spectacular fights, which will be awarded with another bonus by the ACB league.