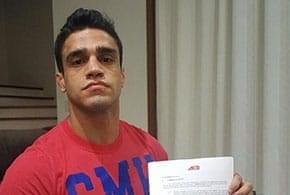 The former UFC fighter Thiago Tavares has joined the roster of the featherweight division! Thiago has been in professional MMA since 2003 and during that time he’s managed to have 28 bouts and win 21 of them. Tavares has finished most of the fights inside the distance, mainly by submissions - 3 KO/TKO, 14 SUB, 3 DEC. At the moment, the fighter is ranked 26th in the world according to Fighmatrix.