Mutual check-up in the Saul Rogers vs Musa Khamanaev fight 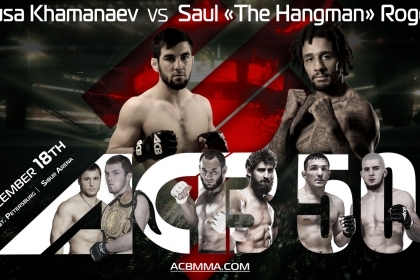 Mutual check-up in the Saul Rogers vs Musa Khamanaev fight

Many fans followed the 22nd season of “The Ultimate Fighter” show closely. There an Irishman Conor McGregor was one of the coaches, who gathered the strongest fighters from Europe in his team. An Englishman Saul “Tha Hangman” Rogers was the hottest fighter in the European team (of course, after Artem Lobov). His nickname clearly alludes to his choking skills. For greater effect Saul enters many fights with the executioner's noose in his hand, obviously hinting at what is in store for his opponent in the near future. Rogers made it to the final of the project, but the circumstances were such that he could not continue his career overseas, and among a variety of options he decided to join the ACB League, signing an agreement for a few fights. At the moment 26-year Rogers has 12 wins with 9 finishes (1 KO, 8 SUB) and only 1 defeat, he’s currently riding a 6-fight winning streak. And this is without taking into account 4 fights he won in TUF. Saul, without exaggeration, is one of the strongest lightweight fighters in Europe, so it is not surprising that he decided to try his hand in ACB. After all, you can say whatever you want, but the lightweight division in the Russian promotion is very competitive. Here Rogers can fully demonstrate his potential, because his last two fights after returning from TUF were, with all due respect, not with the strongest opponents. But his next challenge in the ACB league is perhaps one of the biggest in his career. And that will be the fighter of the “Berkut” club - Musa Khamanaev. Several years ago Khamanaev was considered one of the most talented lightweights in Russia. And the athlete has proved that these are not mere empty words, winning the M-1 lightweight championship. It was clear that Musa aims to go overseas and the opportunity presented itself to him. He faced Jason Knight in the bout for getting in the UFC at the Titan FC 35 tournament. Musa solidly dominated in the first round, but in the second five-minute he was “caught” with the choke and was forced to surrender. The defeat was very annoying, but Musa quickly rebounded from it and started training. His fight with American Brian Cobb was supposed to headline the ACB 27 tournament in Dushanbe, however, from this event Musa’s career went downhill. As bad luck would have it, the slated matchups got frustrated at the last moment – Khamanaev’s opponents pulled out due to injuries or Musa himself could not compete for various reasons. As a result, over the past year the Russian athlete had only two fights, which is very little for a talented fighter who is in his prime. The Russian won them easily, however, to return to the top he needs a confident victory over a strong opponent. And now, after all the trouble, Khamanaev has a great chance to show his true level. It is difficult to come up with a more suitable candidate for this than Rogers, who is well known in the MMA scene. Recall that Khamanaev is 29 years old, and his record is 17 wins with 11 finishes (7 KO, 4 SUB). So what do we end up with? Two fighters, who are at the peak of their physical abilities. Khamanaev is rather versatile, able to fight in all planes, while Rogers still prefers wrestling to striking. Both have had some problems in their careers over the last few years, so each one seeks a triumph over an eminent opponent more than ever. Predictions are unrewarding, but in this case, as much as one would like to, he can not pick one of the fighters as a favorite.