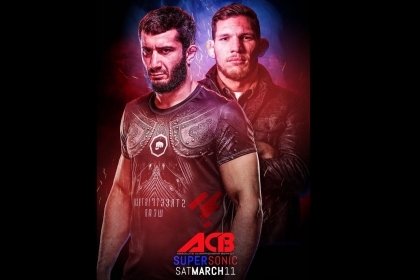 Last week the ACB League announced the tournament in Manchester with one of the best middleweights of the world Mamed Khalidov. His opponent has also been known in advance, but now all the legal issues are settled, and we can tell his name – the English fighter Luke Baranatt will confront Khalidov. These fighters are very familiar to the fans of martial arts around the world, but we have prepared a brief overview for those who, for whatever reason, are not aware of their achievements:

Mamed has built his almost entire career in mixed martial arts in Poland, therefore, the Russian audience may not associate his name with those of the biggest stars in the world MMA scene. However, in fact Halidov is one of the strongest middleweight fighters in the world. 36-year-old Khalidov’s record includes 37 bouts – 31 wins (12 KO, 19 SUB), 4 losses and 2 draws. And that’s accounting for the fact that 3 of his 4 defeats were in 2004-2005. At this point Mamed is riding a 12-fight winning streak, he is at the 10th place in the fightmatrix ranking, and he owns the champion title of one of the biggest promotions of Europe KSW. In Poland he is a true icon of mixed martial arts - over a million people are following him on social networks. Mamed is friends with many famous fighters from Russia including Alexander Shlemenko, for whom he was a second in his fight with Vyacheslav Vasilevsky. In the cage Mamed mainly relies on his wrestling and grappling skills, though he is able to withstand even the toughest strikers in stand-up. A leg lock is one of his favorite techniques.

An Englishman Barnatt comes from “The Ultimate Fighter” reality show. He took part in the 17th season of the project, where Chael Sonnen and Jon Jones were the coaches. After winning a qualifying bout Luke got into Sonnen’s team, and he was the first choice of the coaches among 16 participants. Finally, he lost in the quarterfinals, but still got a chance to try his hand in UFC. Luke won the first three fights, but then he hit a rough patch in his career with a three-fight losing streak. Despite the fact that 2 out of 3 fights ended in favor of his opponents with very close decisions, the UFC breaks the contract with Luke, and he returns to Europe. Barnatt has fought in three bouts since then, winning all of them, and he won the middleweight title of the Italian promotion Venator FC. Now Barnatt is 28 years old, and his overall record is 11 wins (5 KO, 4 SUB) and 3 losses. He occupies the 47th line in the fightmatrix ranking. For his weight Luke is very tall and has long limbs, and he actively uses this advantage in a fight. He does not focus on a specific martial arts school, trying to fight in diverse ways.