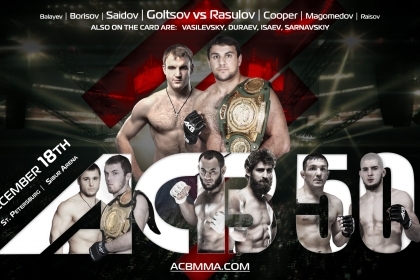 We all love to watch the performances of the heavyweights. Yes, perhaps there are no furious paces and high tempo, but the audience’s love for the knockouts that occur very often here, is able to surpass these minor flaws.

As we know, the heavyweight division is every promoter’s headache. There have always been lots of great heavyweights in Russia, but they’ve all sought to go overseas, not wanting to take on their compatriots, because it would automatically cross out the chances of one of the participants to perform abroad. However, there is a different approach to matchmaking in the ACB league. We are not afraid to match two talented fighters, because it is for such confrontations that people like our league.

And in the main fight of the jubilee ACB tournament we’ll see a real battle between two best heavyweights in our league. Salimgerey Rasulov (15-6 MMA, 4-0 ACB) has passed through a complex selection by the Grand Prix system to defeat the defending champion Zelimkhan Umiev in the hardest fight and to take away his belt this February. Over the past 5 years and 11 fights Salimgerey has only once come out of the cage with a loss. Much time has passed since his last defense, and he was able to heal all his old injuries, so he’ll be in the best shape for the most important fight of his life. Rasulov is fairly considered one of the most underrated fighters of the ACB League. However, the victory over such opponent as Goltsov will radically change the situation.

26-year-old Denis Goltsov (18-4 MMA, 2-0 ACB) has earned a reputation of one of the most promising Russian heavyweight fighters. His winning streak of 13 fights is an amazing result for the heavyweight division. Goltsov assumes the 23rd spot in the fightmatrix ranking of the strongest heavyweights in the world and he is the youngest fighter in the top thirty. Denis also regularly participates in amateur competitions in combat sambo, where he ranks high. For the native of St. Petersburg this fight will be an opportunity to prove to everyone that he is able to compete with the toughest opponents, since many fans often criticize the fighter for the lack of serious opposition in his record.

Many say that Goltsov is an obvious favorite of the forthcoming fight, but these statements are built on quicksand. Firstly, this is the heavyweight division where anything can happen. Secondly, the fighters are on completely equal footing – there are no factors of acclimatization and jet lag, as is the case in the fight with foreigners. Thirdly, though Rasulov is not so well-known to the general public, he’s had not less dangerous and serious opponents than those of Goltsov. So the chances of winning for each of the fighters are absolutely even.