Beslan Isaev vs Steve Carl at ACB 49: The most difficult test in the Russian fighter’s career 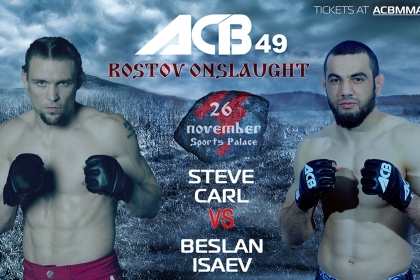 Beslan Isaev vs Steve Carl at ACB 49: The most difficult test in the Russian fighter’s career

Those who have been watching the ACB League know Beslan Isaev (34-8 MMA; 9-1 ACB) well. This fighter has been in the league from the very beginning, he owned a belt in the welterweight division and he also holds a record of the promotion in the number of fights under its banner. Before his last bout he had been riding a terrific 10-fight winning streak, 9 of which he won in the ACB league.

However, at the ACB 43 tournament Beslan lost by unanimous decision to a dangerous American Brett Cooper, who will now compete for the title of the organization. And now, a few months after the upsetting defeat, Isaev is back in the cage. Immediately after the August event Beslan asked the management for a chance to rehabilitate himself, and he insisted on the fact that he should be given the most serious opponent.

And his wish was fulfilled, he will face Steve Carl (22-5 MMA; 0-0 ACB) who is a former Bellator fighter and a former champion of the WSOF organization. Carl is a very high level wrestler, as evidenced by his 17 finishes by painful holds or chokes. Perhaps he really is Isaev’s most serious opponent of late. It’s a difficult situation for Beslan - two defeats in a row will throw him off far back, however a convincing victory over such a tough opponent will help restore his position in the title race. Beslan has decided to go all-in, and he certainly deserves great respect for that.