Askar "Bullet" Askarov: The story of a deaf fighter or our 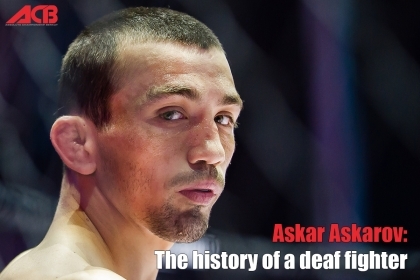 Askar "Bullet" Askarov: The story of a deaf fighter or our

Matt Hamill There is an example of a deaf fighter in the world of MMA who competed at the highest level. This is an American athlete Matt Hamill. At the time, he caused a stir and attracted serious attention to the problem of people with hearing impairments due to his vivid fights in the cage. Few people know that we also have an athlete in Russia who suffers from a similar ailment. His name is Askar Askarov. However, Matt Hamill is completely deaf, and Ascar can hear, albeit very poorly. Somehow, in the West any stories about fighters with a health problem have always attracted a lot of attention, and athletes themselves become almost national heroes. In Russia no one cares, and it is very sad. After all, one should never forget about the human values.

Naturally, we all love trash talk and scandals, but it would be nice if such stories interested the public as well. By nature Askar is a very modest and quiet person. He is not a showman, and he will never be one. He fights not for money, glory or attention. He just wants to prove to himself and to all others that despite all the hardships and challenges he is stronger. Stronger than circumstances, stronger than problems, and most importantly - stronger than his opponents. Since childhood, he’s used to dealing with the difficulties and injustices of the world, proving to everyone that regardless of almost complete absence of hearing, with a great desire one can reach the highest goals. Currently Askar’s record includes seven wins and not a single defeat in the professional arena of mixed martial arts. His speed in fights earned him a nickname "Bullet", and while watching his performances, one at once understands that it suits him 100%. According to the athlete, he is always very calm in a fight, because no background noise distracts him.

He does not hear the tips of his corner, but at the same time it helps him to fully concentrate on his opponent while being completely abstracted from all external stimuli. We highly recommend you to turn your attention to this guy. He's a hard worker and an example to follow. Many people have a lot to learn from him. And even if he can’t skillfully throw mud at his opponent, he is always ready to please the fans with a spectacular fight. Despite the fact that he does not hear the support of the audience, he really deserves this support.