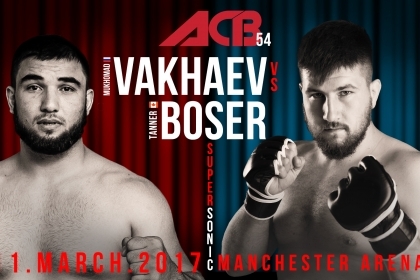 Mukhomad Vakhaev is now riding a two-fight winning streak with both victories inside distance. The fighter faced strong opponents, including a former heavyweight champion Salimgerey Rasulov, to whom he lost by decision which suggests that the athlete is very well prepared. There is no doubt that Mukhomad will give his 100% in order to win the upcoming match and continue his winning streak.

Tanner Boser has just recently signed a contract with the ACB league. He is more experienced than his opponent, as he won 12 out of 14 fights, most of them by knockout. At the moment, Tanner is ranked 49th in the world according to Fightmatrix and he is one of the best heavyweights in Canada. Of course, the fighter wants to start with a spectacular victory in the new organization, and we are looking forward to a serious confrontation with an unpredictable ending!