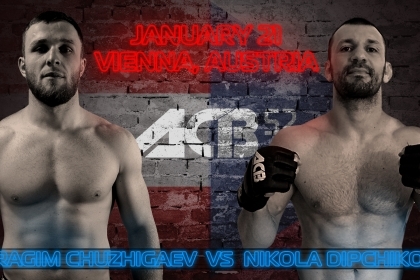 Just recently Ibragim Chuzhigaev has been fighting in the ACB Young Eagles "youth" league. The fight at the ACB 47 “Braveheart” tournament, where Ibragim defeated Lee Chadwick by TKO, became the “final exam” which transferred the fighter to the major league. Ibragim is a rather ambitious fighter. He said he wants to fight only with those opponents, who will bring him closer to the title. At the ACB 52 tournament in Vienna he will face Nikola Dipchikov, a Bulgarian fighter, whom Chuzhigaev himself named among the opponents interesting for him on his way to the title.

Unlike his opponent, Nikola Dipchikov has extensive experience in mixed martial arts. There are 18 fights in his record, and his two last fights were in the ACB league - one win and one loss, which he suffered from Muslim Hizriev in a very tough bout. By the way, Nikola rarely allows judges to decide the outcome of the match, he knocked out his opponents 11 times, and most KO were in the first round. One thing is certain, he wants to redeem himself after his last loss and he will not give Ibragim Chuzhigaev a break. On January 21 we are going to see a very interesting confrontation in which both fighters are motivated to win spectacularly at the ACB 52 tournament.