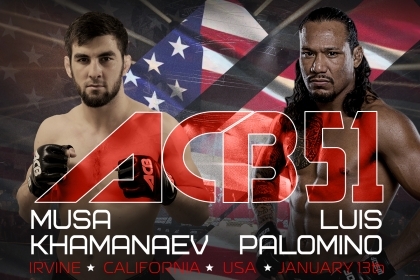 29-year-old Musa Khamanaev began his career as a professional MMA fighter in 2008. Since then he has earned a record of 17 wins and 4 losses. All who follow Musa’s performances know his rapid takedowns and transitions to the ground. He fights till final victory without a single doubt in his actions. Despite being humble and reserved, in a fight Musa is aggressive and ruthless to his opponents. Khamanaev will face Luis Palomino, who has previously competed in WSOF and Bellator, where he has repeatedly headlined the tournaments.

He has already fought in 37 bouts and won 24 of them - 14 KO/TKO, 2 SUB, 8 DEC. As is clear from his record, the fighter finished most of the bouts inside distance by knockouts. Now Luis is riding not a very successful streak – he’s lost 4 of his 5 last fights. He surely wants to show everything he’s capable of in the upcoming fight and to win at any cost. The victory in this confrontation is crucial for both fighters, and we’ll see who will become the winner of this fight on January 13 at the ACB 51 tournament.