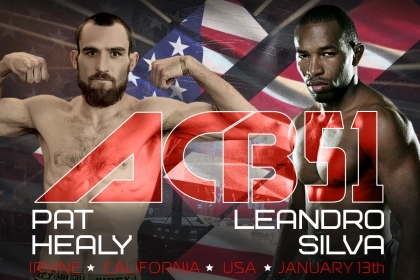 A former UFC fighter and an ex-champion of Titan FC Pat Healy joined the roster of the ACB lightweight division just a week ago. He is a very experienced fighter, who has fought in 55 bouts during his career, and in many of them he has faced very strong fighters including Khabib Nurmagomedov. He’s got a great number of wins - 33 - most of which he’s finished by submissions. Obviously, he wants to prove himself in the new promotion. And a defeat in his last fight definitely motivates him to win. Now he’s ranked 107 in the Fightmatrix rankings.

Pat will square off against a former UFC fighter Leandro "Buscape" Silva, who has also recently signed a contract with the ACB league. He's two years younger than his opponent, but, nevertheless, there are much less fights in his record. At the same time, Leandro has a greater percentage of wins, 19, 10 of which he finished by submissions, indicating his grappling skills, against 5 defeats by decision. At the moment, Leandro is ranked 51 according to Fightmatrix rankings. As a result, we are looking forward for an interesting confrontation between two very experienced fighters!